My first off base trip was on Friday (17th Jan), to a Lifetime of Halley site. These sites consist of a GPS tracker, power system (solar panel, wind generator and batteries) and VHF transmitter, and they record the movement of the Brunt ice shelf at various locations. By being able to monitor the shelf movement, possible calving events and cracks can be anticipated by how the sites are moving relative to each other – if they are moving at different rates, something will have to give. 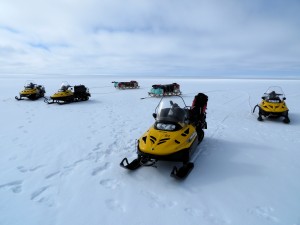 The location we visited was about a 32km drive from base. We travelled on Ski-Doos, initially along a flag line (a known safe route) so we could travel quickly and unlinked. For the last leg we had to drive cross country, so we stopped and linked together in two pairs. Travelling like this is interesting, because you have to judge your speed quite carefully to avoid either running over the rope, or being towed by the person in front.

Once at the site, our job was to dig it up rebuild it on the surface, as the snow accumulation would otherwise cause it to disappear quite quickly. It took in total about two to three hours to do this, with a short break for lunch. As we were making good time, we were able to have a steady journey back to base and just enjoy the drive. 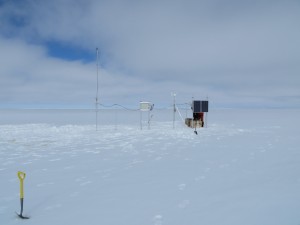 Lifetime of Halley site, after being raised.