The journey to Antarctica started with an overnight flight on the 8th December from Heathrow to Cape Town, where we met up with the RRS Ernest Shackleton – the ship we will be travelling south on. As the ship was awaiting some minor repairs, we had some time to explore Cape Town.

The rest of the ‘Science’ wintering team (Julian, Mike & Octavian) and I decided to visit Table Mountain. We took one of the open top city tour busses to the cable car, which was great as we got an overview of the city and it’s history – not in a huge amount of detail, but given the time we had it was a very efficient way of finding out about the place.

The cable car up to table mountain gave us a hint of the views we would get at the top, which were amazing. The weather was fantastic (about 30°C, with a light breeze) and you could see across the whole of Cape Town and beyond. We walked around one of the trails at the top, which took about 45 minutes, before heading back down and taking the tour bus round the rest of it’s route back to the waterfront area, where we found a resteraunt that served local wildlife, paid a quick visit to a local bar with some more collegues, then headed back to the ship for some much needed sleep.

As the engineers were still working on the ship on Tuesday, shore leave was being allowed on a two hourly basis – meaning we had to return to the ship every couple of hours to find out whether we had another two hours or not. Therefore, we spent the day around the waterfront district, enjoying the warm weather and thinging how odd it looked seeing the Christmas decorations up in the sun and heat.

By Wednesday repairs had been completed so there was no shore leave, as we were simply awaiting a pilot to navigate the ship from the docks we were in to the port immigration office. The pilot didn’t arrive until the afternoon, after which we got out passports stamped and returned to the ship to await another pilot to take the ship out of the docks, which fortunately didn’t take as long. 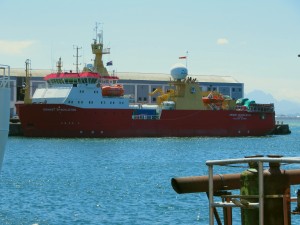 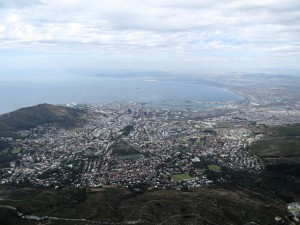 Cape Town from Table Mountain. Can you see the Shackleton? 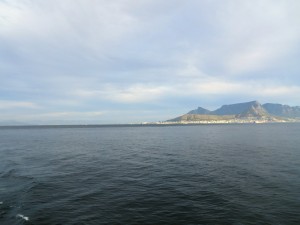