This past week was my second winter trip, again with Al and Silver, this time six days (five nights) long. Unfortunately bad weather delayed our departure three days, but weather is just ‘luck of the draw’ when it comes to trips – they are timed to try and get the best of it, and are ordered so that people should get good weather in at least one trip (which we did last round), but at the end of the day you just have to accept it. 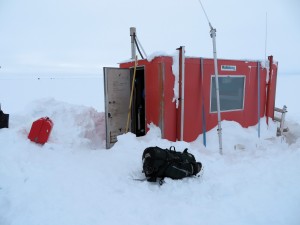 When the weather did clear up on Sunday afternoon, we headed out to the caboose at Windy bay. We were able to depart quite promptly as we had been packed for several days and as there is a flag line to Windy we were able to travel unlinked as the route is known to be safe. We set up in the caboose and settled in for the night with nothing but the sounds of the Reflex stove putting away, the wind around the caboose and the Emperor Penguin colony down on the sea ice a few hundred meters away. 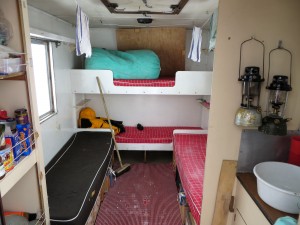 We stayed in the caboose Monday morning as we had been informed by Kev, back on station with the latest weather forecast, that the wind was due to continue dropping. Early afternoon we set off towards the penguin colony, where we abseiled down the cliff onto the sea ice with the birds. On the way we saw a number of Petrels flying around, a sure sign that Antarctica is starting to wake from the winter. 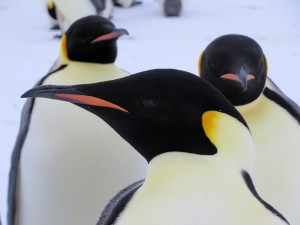 The penguins had spread out from their winter huddle into a few large groups with many more spread out between these. The chicks were becoming decidedly active and the majority were off their parents feet and running around, chasing each other and wrestling. I didn’t see any that were starting to lose their baby feathers, but some were beginning to imitate adult behavior, forming little groups and copying their actions. The chicks are definitely getting bigger, generally about a foot in height now, with the adults standing at about three feet tall and are the largest species of penguin.

We spent several hours down on the ice where it was surprisingly warm – the wind had indeed dropped off, almost completely, so that we could wear thin or no gloves most of the time which made camera operation easier. We then headed back to our rope where we tried some ice climbing – Silver was much more successful at it than I was – before jumaring up and heading back to the caboose to recover from the surprisingly exhausting ascent, probably due to a combination of the warm weather and the many layers of clothing being worn. 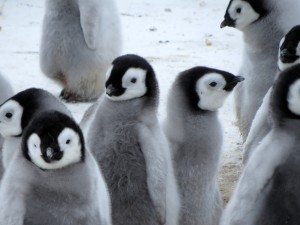 Several chicks in a small (and very fluffy) group

The remainder of the day was spent relaxing in the caboose again and we started back to station on Tuesday morning. managing to arrive before the next wave of poor weather arrived.